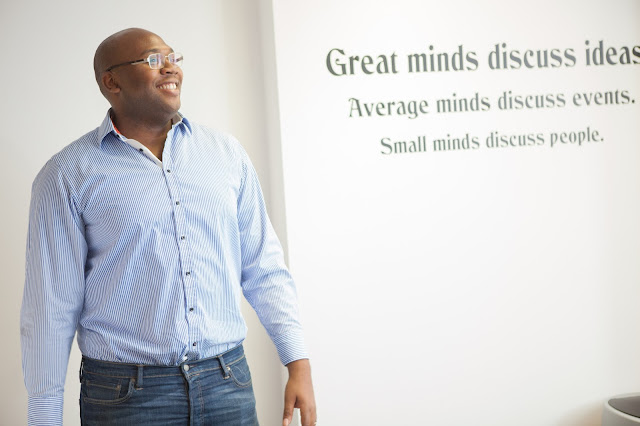 Thursday 29 August 2013. Jason Njoku, co-founder and CEO of iROKOtv, has won the acclaimed title of CNBC Young Business Leader of the Year2013 – West Africa. The accolade was awarded to him on the evening of Wednesday 28 August, at the Intercontinental Hotel, Lagos, Nigeria and was attended by captains of industry and government leaders. The annual ‘All Africa Business Leaders Awards – West Africa’ (AABLA – WA) honours business excellence in the West Africa region that has had a considerable impact on their industry and the community that they serve.
Jason Njoku said from his London offices: “This is an incredible honour, to be recognised by my peers and notable business leaders from across West Africa. I enjoyed going through the rigorous judging process as it helped me put into context the achievements iROKO has reached, as well as consider the challenges we have for the future.
“Being an entrepreneur is the hardest thing someone can ever do; it consumes every second of your day and will challenge and push you to your absolute limits. It is both brutal and sublime and as many of my peers will testify, doing business in Africa comes with its own set of unique challenges. That being said, there’s nothing else I would want to be doing with my life and I’m extremely proud of what we’ve been able to build with iROKO giving the African internet scene the global platform it so rightly deserves.
“I am thrilled with this award and would like to thank CNBC, Forbes Africa, ABN 360 Productions, the esteemed judging panel and everyone else involved with the event. I would also like to take this opportunity to congratulate my fellow finalists and winners on the evening.”
The judging panel for AABLA West Africa included; Seyi Bickersteth – National Senior Partner of KPMG Professional Services, Nigeria; Oscar N. Onyema -Chief Executive Officer, The Nigerian Stock Exchange and Bismark J. Rewane – Economist and Banker.
In December 2010, Njoku launched a YouTube site dedicated to streaming Nollywood movies called Nollywood Love, which attracted the attention of US-based Hedge Fund Tiger Global who led on two rounds of funding totalling $8Mn. This was invested into building a dedicated movie platform and purchasing more movie content. Today www.irokotv.com is the world’s largest online distributor of Nigerian movies, with a catalogue of over 5,000 and has been dubbed by the world’s media as the ‘Netflix of Nollywood’. It records close to 1Mn unique visitors a month with Nollywood fans logging in from 178 countries in the world. The company has disrupted the Nollywood movie industry and has successfully reorganised the global distribution of one of Nigeria’s most prized exports.
Njoku concludes: “I cannot receive this award without mentioning the unfaltering love, support and patience of my wife, Mary, who has recently brought our first son into the world, making me the happiest man alive. I must also thank my best friend, business partner and iROKO co-founder, Bastian Gotter, whose initial investments into my ‘crazy Nollywood internet project’ have helped us to grow our business into a market leader. Without the combined help and support from Mary and Bastian, the company simply wouldn’t exist.”
In 2012, Njoku was touted by Forbes Africa as one of Africa’s Top Young Millionaires to watch and earlier this year, he was named by New African Magazine as one of Africa’s Top 50 African Trailblazers. He is also an official Growth Ambassador for the Alternative Securities Market (ASeM) with the Nigerian Stock Exchange (NSE).
-ENDS-
For further information please contact: Jessica Hope, Global Communications Officer – jessica.hope@irokopartners.com | 00 44 (0)207 401 2802
Africa businessAwardsJason NjokuNigeriaNollywood
Share Tweet Pin It +1

Who Is Your Favourite Nollywood Mother-in-Law?

The Nanny on iROKOtv PLUS!