EXCLUSIVE INTERVIEW with the director of True Story Nollywood

Here at iROKOtv, the world’s online home of FREE and awesome Nigerian movies, we live, breath, sleep, eat Nollywood. It’s in our DNA. We’ve always said that nobody loves Nollywood like we do…..

….That was until we met Ihuoma Mambo Atanga – a young up and coming filmmaker of Nigerian/Cameroonian descent, based in the US. This lady has spent the last year directing a documentary on all-things Nollywood…. interviews, behind the scenes action, thought-provoking debate about the state of Nigeria’s movie industry – it’s a fascinating project. 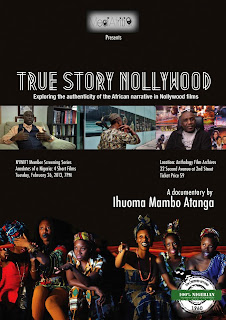 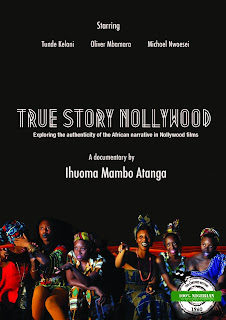 The film is called True Story Nollywood and it highlights various subjects of discourse surrounding the topic, among prominent Nollywood filmmakers and people based in her current city of residence, New York City including renowned Nollywood director Tunde Kelani.

True Story Nollywood examines the educated opinions, gossip, lies and truths behind the evolution and authenticity of Nollywood stories from the perspective of industry connoisseurs, Michael Nwaesi, Oliver Mbamara, Tunde Kelani, and a host of Nollywood film enthusiasts.

True Story Nollywood premiers in New York on 26th February and you can watch a trailer here: https://vimeo.com/59014693#at=0

In the meantime, we have an EXCLUSIVE interview with Ihuoma Mambo Atanga here on the iROKOtv blog….

What is it about Nollywood that you love?
What I love about Nollywood is the attachment to reality of the stories in almost all the films. These stories have learnt to flow in congruence with the language, quality and context of the present society.

I love the rawness of the street noise, the sound of Nkem Owoh swallowing garri and insulting his wife who suffered to cook it, I love the lingo “how do you mean”. Nollywood speaks to the reality of not only Nigerians but also the average West African person. The films are dramatic and enjoyable in all its imperfections.

Who’s your favorite Nollywood star?
My word! That’s a hard one, I’m a Nollywood baby in that I grew up at the inception era of Nollywood, as we know it, so my favorite Nollywood star has changed time without number since I started watching the films.  For now I’d say its Nse Ikpe, the girl delivers
effortlessly. Someone needs to give her more challenging roles in major productions.

What was your inspiration behind making this film about the Nigerian movie industry?
My inspiration stems from the passionate chatter I hear in Harlem braiding salons about the change in the films, Chimamanda’s Danger of a Single Story, my peers’ sudden interest in all things Nollywood, Binyavanga Wainaina’s How To Write About Africa, and my biggest inspiration of them all, Achille Mbembe’s African modes of self-writing. After reading Mbembe’s book I began questioning what it means to produce/reproduce stories that are authentically African.

Nollywood is no longer Nigeria specific; it covers Nigeria, Ghana, and well a tiny bit of Cameroon. Furthermore, because Nollywood is the third largest film industry in the world, the stories that emanate from its films can longer be ignored. it is not just stories about Africa, but it is stories about Africa by Africans to the world. Someone needed to talk about these stories on their impact on the African narrative as a whole, so I’m taking up that cross through this short documentary.

Give us some background about your film:
True Story Nollywood is a short documentary about the authenticity of the African narrative in Nollywood films. It is safe to say that Nollywood has evolved, however, it has come to my attention that not everyone thinks it is necessary for all aspects of the industry
to evolve. The main reason being the, “preservation of the cultural authenticity” in their films.

Where do you see Nollywood in five years’ time?
At the rate at which it is growing, I foresee a Nollywood that produces higher quality films, one with even more clout, and a decrease in the number of films produced as a result of an increase in the quality of its films.

Because a girl has the right to dream, I foresee a change in the industry’s name from Nollywood to something more authentic, like, let’s see… Ulötola (Latola- first film production company in Nigeria- Ulö- Igbo for house/home) or any name of the sort which is more representative the industry.

What’s your favorite film?
My favorite has to be Shirley Frimpong Manso’s A Sting in a Tale.
There isn’t a moment free of suspense; the story was just as beautiful as it was complex. There is just enough tragedy to trigger your deepest emotions, enough laughter to keep you going and suspense to keep you hoping. Majid and Adjetey Anang never disappoint so its a must watch.

How did you come across iROKOtv?
I migrated like every other Nollywood fanatic, from NollywoodLove on YouTube to iROKOtv. If it puts money in the hands of the filmmakers, then it only makes sense to support it, which is why I subscribed. Plus, it’s a sexy site, what’s not to love?

MISSION TO LOVE is now showing on iROKOtv.com

Previous PostTwo Amazing Blockbusters Live On iROKOtv PLUS
Next PostMid-Week Chartbuster: Chiwetalu Agu and PawPaw in “Double Mama” Live on iROKOtv PLUS